Product images are for illustrative purposes only and may differ from the actual product. Due to differences in monitors, colours of products may also appear different to those shown on the site.

This EOS Lenses are labelled with Expiry Date SEPT 2021.

However, the expired date means the last day you can "open" the lens bottle, not last day to "wear".

Dolly like effect with thick black ring around the lens (14.5mm diameter)

Friendly tips: It work best with at least light makeup Natural color: Green/Brown
There amazing i can wear them for over 8 hours without have to use eye drops! 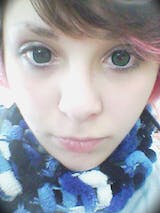 These contact lens are sooo comfortable that u can hardly now they are there..and the customers service is best. 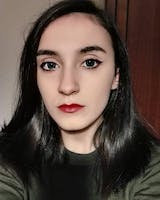 Came very fast and they are perfect !!!!!!!!! thank you for a good product !!!!!! Now cosplaying as Sakura Haruno will be awesome hehe :)

A
A.
Very Impressed

I was extremely hesitant in getting color lenses because of my dark brown almost black eyes. I just assumed the color wouldn't show up and there wouldn't be much of a reason why to even get colored contacts. Wow, these are vibrant! What you see in the picture is exactly what they look like with flash. Indoors it's a bit more muted but that's what you want, I promise. I was concerned with how bright they were in I first put them in in my heavily lit bathroom. They color is still very noticeable but not as 'glowing' if that makes sense. Outdoors it's a very cool, muted green that just looks inviting. I love it. My friend kept having me look at her because she just loved seeing them. My boyfriend thought they were cool, they are just awesome. (Color: 5/5)

I wasn't expecting any enlargement in this since my first pair were the same size and it wasn't a noticeable difference. I just wanted to have the good medium of natural enlargement but vibrant color so it wasn't to strange looking on me. (Enlargement: 3/5)

What impressed me most about these lenses was how COMFORTABLE they were. My first pair are the Hana Super Ring circle lenses in black and I tend to feel those at times but it's not to bothersome. These are fantastic. The first day I had them in for 11 hrs (after soaking them for 24hrs). Don't get me wrong, it's recommended to remove them after 4-6hrs but I was over at a friend's and I didn't bring my lens case and solution with me. But after 11hrs of wear and only feel eye exhaustion, that's impressive. Heck, the eye exhaustion just could've been because it was close to midnight. (Comfort 5/5)

The one negative: Even though I've worn them 4 times since I've got them, they still get bunched when I put them into my eye. I have to the lens around a bit in my eye for it to flatten against the surface. Once it's secure they don't bunch up again so it's not a big complaint. To be a helpful review though, just thought I'd warn any potential customers for these lenses...

Great enlargement...but they are only vivid out there green with flash. I was hoping for a brighter green even in regular lighting. Still ver pretty. Comfertable if you cblink reguarly and close your eyes for about a minute after they are properly placed on eye. 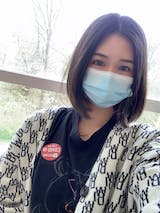 Heres a lil menhera/yamikawaii look I did the other day, mainly because I wanted to try out some new lenses! 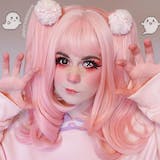 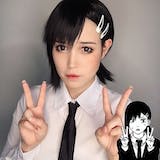 they're super pretty and natural which i like a lot :3 definitely recommend! 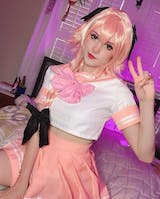 These lenses make my eyes POP! My cosplays with and without these lenses are very different. Plus I can use these with many different characters, from Jabami to Bakugou. I also wear these outside, and they do not bother me for almost 4 hours even when Im out with my friends.